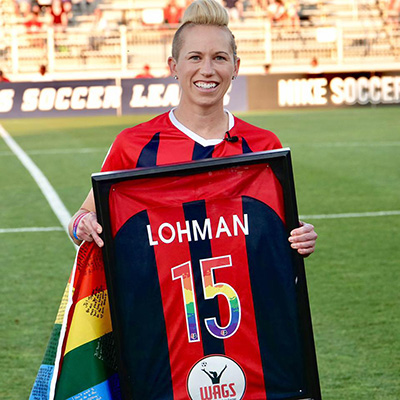 www.joannalohman.com
Joanna has been rocking stages and fields all over the globe for more than two decades. She is a former professional soccer player and member of the United States Women’s National Team. During her 16-year professional career, she has built a platform for social impact and became the first player in Washington Spirit history to have her jersey retired. She is a human rights activist, teacher, and serves as a sport diplomat for the U.S. Department of State, traveling the world and running programs in less developed nations. Specializing in sub-Saharan Africa, Joanna has led impactful experiences in Botswana, Côte d’Ivoire, Niger, and Nigeria that promote gender equality, conflict resolution, cultural understanding, and economic development. Having visited or lived in 45-plus countries and counting, Joanna, is truly a citizen of the world.

Despite her public profile as “the Rainbow Warrior,” Joanna maintains a humble and accessible presence with her fans. As one of the first openly gay soccer players in the world, Joanna has focused on helping individuals and groups understand the steps involved in living an unabashedly authentic life — based in deep-rooted acceptance and discovering comfort in their own skin. As a professional speaker, she has shared her message with organizations all over the world, including: The Minnesota Vikings, The Human Rights Campaign, Chamber of Commerce Foundation, Qualcomm, Lifetime Television, and many more.

Due to the popularity and resonance of her message, Joanna has created her own online course, “Define Your Beauty,” that takes individuals on a journey into their heart and soul to discover the qualities that truly make them unique. Simon Sinek, New York Times best-selling author of Start With Why, said, “Joanna is a force of nature. A thunderclap of inspiration! From the moment I met her, I was struck by her ability to help people feel safe in their own skin, to feel proud to be who they are. She has been a positive and inspiring force in my life and now she can be one in yours too.” 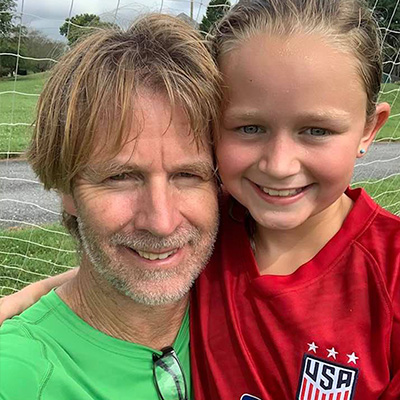 A working journalist for more than 40 years, Paul Tukey has won awards in the worlds of newspapers, magazines, films, television and books. He launched his career in sportswriting with Maine Sunday Telegram and Portland Press Herald in the 1980s covering the Red Sox, Celtics, Patriots and Bruins. In the ’90s, he founded his own media company, People, Places & Plants, which launched several magazines and an EMMY-nominated HGTV program of the same name. Paul directed, produced and hosted 52 episodes of the program for four years under contract to the Scripps Networks.

Winner of the prestigious Communicator of the Year Award from the American Horticultural Society, as well as the 2018 Green Medal Award from the Garden Writers of America, Paul has been featured in thousands of media outlets from Martha Stewart and Good Morning America as well as National Geographic, Readers Digest and the New York Times, which called him, “The godfather of the natural land care movement.” His two previous books include the Organic Lawn Care Manual (Storey 2007) and Tag, Toss & Run: 40 Classic Lawn Games (Storey 2012). His 2010 feature-length documentary film titled, “A Chemical Reaction,” profiling the lawn pesticide bans sweeping across Canada and the U.S., earned three EMMY nominations.

Now serving as the Director of Environmental Stewardship for the Glenstone Museum in Potomac., Md., Paul has helped lead the way in developing sustainable practices for the nearly 300-acre site that includes native meadows, a five-acre organic lawn, and restored streams and tributaries. An avid gardener, photographer, writer, and runner, Paul, 60, now resides in Maryland with his wife, Katie, and daughters Aimee, 14, and Angie, who inspired this book. At just 11 years old, she has been playing elite club-level soccer for five years. Paul’s daughter Christina, a Williams College graduate, is a physician in Bath, Maine, and his son, Paul III, is a singer-songwriter based in Baltimore.

How We Came Up with The Book

Let’s dispense with formalities, shall we? One of us, Joanna, is a recently retired soccer player enjoying life with the woman of her dreams, and the other, Paul, is a journalist and grandfather with two daughters still living at the home in Maryland he shares with his wife. In other words, we’re a thirty-something woman and an older man coming to you with a book about life and parenting, a subject neither of us will ever claim to have mastered. What one of us brings to this project is 16 years as a professional athlete and the requisite stories and relationships that went into, and came from, the journey of coming out and staying devoted to a career that paid poverty level wages. The other partner brings a 40-year journey as a writer that began on the sidelines covering sporting events in New England in the 1980s. That path ultimately led, among other places, to the National Mall in Washington, D.C., where scientists and other activists were questioning the human and environmental impacts of synthetic chemicals used to make sports fields and front lawns green.

How did our two paths collide? Given the subject of this book, you might guess correctly it had something to do with a soccer field. A little girl named Angie, one of those two aforementioned daughters still living at home, had been drawn to Joanna’s distinctive bleach-blonde mohawk — aka “the Jo-Hawk” — ever since she attended her first professional soccer game at age 5. Five years later, bonded by the common goal of helping Angie become the best she could be, on the field and off, the two of us started talking sports — and life — and how so many successes and failures are born from mutually elusive challenges of parenting and coaching.

In the midst of all this, one of Joanna’s former employers, the United States Women’s National Soccer Team, wasn’t just winning games, it was chewing up and spitting out almost everything we previously thought we knew about society. Female athletes can draw massive crowds, yet stand up to presidents. They can draw vast television audiences, while loving whomever they damn well please. They can shave their heads, tie back their blonde ponytails, or dye their black hair pink. They can blur gender lines, or profess their devotion to Jesus, Buddha or nothing at all, and then go celebrate like mad as a team when they beat the crap out of England where the sport was born — but where it was illegal for an immigrant named Lorraine Figgins to even play soccer until 1971 just because she was a girl.

“It’s nothing short of amazing how far we’ve come in my lifetime,” said Lorraine “Figgy” Fitzhugh, looking back on her place as a pioneer of the U.S. Women’s National Team in 1986. She’s a parent herself now, reveling in the diverse role models who have sprung from her wake. Some of them — the Megan Rapinoes, Alex Morgans, and the Carli Lloyds, and a matriarch of American women’s soccer, Mia Hamm — are now household names. Others, like Lorraine herself, have lived in national anonymity, but often stand as pillars in their local schools, churches and communities. For nearly 30 years, Carin Jennings-Gabarra has been the only head coach the female soccer cadets at the U.S. Naval Academy in Annapolis have ever had. Before that, she was one of those soccer pioneers, joining the American team before there was such a thing as a women’s World Cup and, after helping to win the first one in 1991 — and the first Olympic gold medal ever awarded in women’s soccer in 1996 — she left the team to raise a family. Mia Hamm was in the delivery room when Carin’s third child was born.

“That’s what I’m most proud of, the kinds of people and role models I’ve been able to surround myself with throughout my life because of that team,” says Carin. “I think of (the U.S.) hosting that 1999 World Cup where the women had to sell their own tickets and run clinics and do it all themselves just to prove to the nation it could be done. And then you fast forward to this last World Cup in 2019 where they’re trying to empower young girls and they’re fighting for equal rights and equal opportunity. Our program, our women’s team, has always walked the walk. It’s staggering some of the things that this team and those players have accomplished.”

One of us, aka the “Rainbow Warrior,” has experienced that magic, akin to an infusion of collective DNA, as a first-hand participant. The other one of us desperately wants to crack that code for the benefit of his daughters and grandson, their friends — their generations — whether they become college or professional soccer players, or not. Together, through this book, we are sharing a broad collection of personal stories and insights from these National Team players, their families, friends and coaches. Maybe no one will ever perfect parenting or coaching, but we think this book might help.

As of the first printing of this book, just 241 women have made it into one of America’s most successful sororities in the 35-year history of the U.S. Women’s National Team. Whether they played one game like Lorraine Fitzhugh, or nearly 300, like Carli Lloyd, they are all champions of yesterday and today who have changed the rules for women around the world. For every parent who dreams of raising tomorrow’s champions, and every child who aspires to become the best in the world at whatever they do, this is for you. Enjoy.